Parkinson’s disease is a heterogeneous disorder characterized by varying clinical presentations, age of onset, types of nonmotor symptoms, and different rates of progression. While some patients have a relatively benign disease course with favourable response to dopaminergic therapy, others appear to progress more rapidly. Many patients have a greater number of nonmotor symptoms while others do not.

Patients who are diagnosed with this condition may show different signs and symptoms in the beginning. Sometimes, it may not even be noticed in the initial stages. Broadly the symptoms of this condition can be divided as motor and non-motor symptoms.

The following are key features or clinical symptoms:.

2.  Non-motor symptoms like mood and sleep disorders, reduced sense of smell, constipation, urinary problems as well as range of difficulties in mental functions (or cognitive functions) such as attention, memory, planning etc.

Rigidity - stiffness of arms, legs or joints and can restrict the necessary movement of affected side.

Bradykinesia - slowness of movement and may occur during starting of movement or in its continuation.

Postural instability- or balance dysfunction, appears later in the course of the disease.  It can increase the risk of falls and increased nursing-home placement among the affected patients.

​Some of the common NMS includes:
-  Emotion related difficulties- Feeling isolated and lonely or feeling anxious
-  Considerable reduction of drive to engage in goal-directed activities such as learning new things
-  Ache and pains in joints or body, numbness and fatigue,
-  Reduced smell perception.
-  Constipation
-  Urinary disturbances
-  Sleep disorders includes insomnia and sometimes enactment of dreams in the sleep

Difficulties in mental functions or cognitive functions under the NMS includes difficulty in paying attention/ focusing or remembering things.

During medication off states, patients may experience worsening in mood, anxiety, sweating and temperature irregularities, pain/numbness, and other symptoms.

​Nonmotor symptoms during medication on states may include mania, agitation, delusions, paranoia, and impulsivity.

​It is estimated that 5% to 10% of patients have a genetic etiology for the disease. It has also been suspected that transition series metals such as manganese or iron, especially those that generate reactive oxygen species and/or bind to neuromelanin induces Parkinson’s disease. 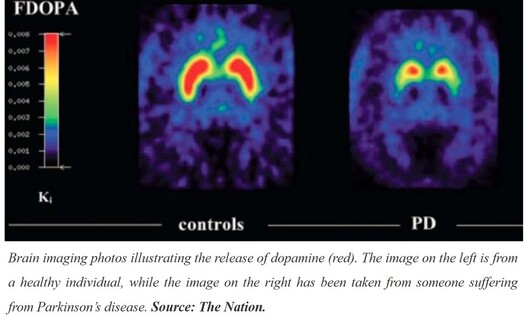 From the pharmacological treatment point of view, dopamine replacement therapy is provided to patient which acts to enhance the dopaminergic activities in the brain in order to alleviate the symptoms caused due to its depletion. Before the start of dopaminergic treatment, patient’s age, comorbid condition, employment status and other quality-of-life issues has to be considered.

​Levodopa is considered to be the gold standard for dopamine replacement therapy in Parkinson’s disease. Exercise should be encouraged for all patients with Parkinson disease as long as it is performed safely. Exercise modalities include core strength training exercises, tai chi, yoga, boxing, and dance and music therapy.

Patients are also assessed to identify any neuropsychological deficits in attention, memory, reasoning, planning, information processing, language etc. and based on the deficits found standardized cognitive retraining is done. These neurocognitive deficits are closely related to overall quality of life and overall functionality of the patient.

-  Cognitive remediation is a promising avenue as a non-pharmacological treatment option for cognitive impairments in various neurological disorders such as stroke or head injury.

-    The functional improvement is achieved by re-establishing or reinforcing previously learned adaptive patterns of behaviour.

Music Based Intervention in Parkinson’s disease

Music based interventions in the recent times is being used to help patients with neurological including Parkinson’s disease. Neuroscience research has demonstrated that music can positively impact cognitive and emotional well-being and movement-related symptoms in person with Parkinson’s disease. It has been found that music can stimulate the production of neurotransmitters namely, dopamine and serotonin which are found to be reduced in individuals suffering from the condition. Music can also activate specific areas of the brain responsible for speech and communication.

Brain areas involved in music and rhythm perception are closely related to those brain areas that regulate movement such as the motor areas of frontal lobe, cerebellum and basal ganglia as well neurocognitive and emotional functions. Music has the ability to activate the key areas of the brain during rhythm perception and serve as an important compensatory purpose. Music increases blood flow and the secretion of dopamine, which is depleted in Parkinson’s disease, which also regulated motivation and goal-directed behaviour. 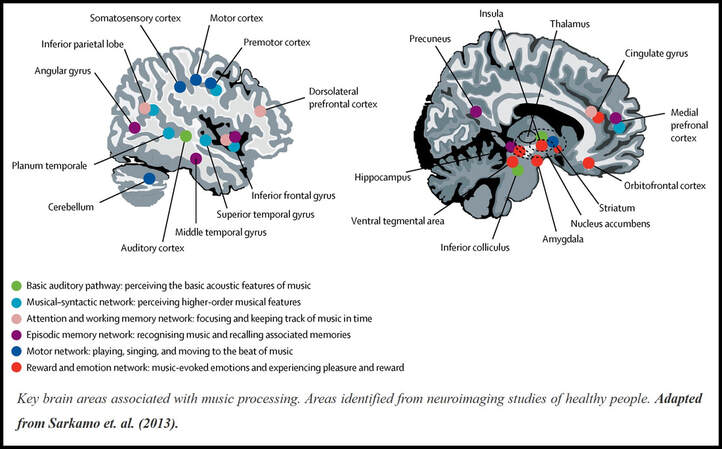 How music helps in alleviating symptoms in Parkinson's disease?

Internal cueing of movement timing is disturbed in persons with Parkinson’s disease, therefore external auditory cuing in the form of metronome pulses or rhythmic music can enable affected individuals to initiate steps and maintain gait movements or can train sequences of action related to everyday tasks. Specific components/elements of music such as rhythm, melody, dynamics tempo etc. are used to achieve non-musical goals such as speech, physical movement, cognition and other functional abilities.

Rhythmic Auditory Stimulation is a kind of music-based intervention that aims to develop and maintain a physiological rhythmic motor activity (gait) through rhythmic auditory cues. RAS was used for improving gait speed, step length, walking up and down the stairs with assistance of metronome and music.

Music makes demands on specific areas of our brain and nervous system and studies have shown that listening to music can improves cognitive skills like fluency, working memory and recognition memory.
​
It has also been demonstrated, through varied use of music that people benefit from music's impact on both hemispheres of the brain, which make learning easier and improves motivation as well.